Ever since the game of roulette was first invented over three centuries ago, it has become one of the most popular casino games in the world. And while at it, the game had transcended and transitioned through different stages, resulting in multiple variations. But despite all that, one thing has remained constant… The excitement of spinning the wheel and waiting for Lady Luck to determine your fate.

With the latest developments in the Internet and mobile technology, roulette has permeated the online casino gambling world, and today it’s more accessible to players than ever before. This compounded with generous casino bonuses has naturally led to the emergence of professional players looking to make a name in the online roulette gambling world.

In this article, we’re going to look at some of the top online casino roulette legends. It doesn’t mean they’re professional players thoughy. In fact most weren’t, and we just lucky. Looking for the best free no deposit casinos in the UK instead? Here’s a comprehensive list at nodepositz UK.

Chris Boyd is one of the very few roulette players in modern history to overturn the assumption that the house always wins. A highly skilled software developer by profession, Chris saved up a whopping $220,000 for many years before heading to Las Vegas to place the wager of his life.

Initially, his big bet was declined, but after negotiating with the casino staff at The Horseshoe Club, he was allowed to place a minimum bet amount of $100,000.

After a few practice spins, he was eventually allowed to bet all his cash on one spin, and he surprisingly won. Unfortunately, he promised to never play another game after this huge, a promise which he has kept to date.

A similar turn of events happened to Asley Revell in 2004, when he decided to make a change in his life by taking his entire life savings, going to Las Vegas, and placing his biggest roulette wager. Along with his entire savings, this gutsy player sold his house, car, watch, and even clothes to collect a total of $135,000.

So compelling was his story, that a TV mini-series documenting this event was created. On that material day, Revell wagered the entire $135,000 on red, and as fate would have it the ball settled on the red 7 pocket. In a single spin, Ashley managed to double his net worth, walking out with $270K. Although the amount wasn’t that big, it’s hard to comprehend the guts this guy had. And that alone earns him a spot on our list.

Ashley Revell put his winnings towards starting an online poker site known as Poker UTD. Recently, he also launched IGaming Recruitment, which is a site that helps people find jobs at online casinos.

Joseph is yet another popular professional player in the roulette world. He’s also touted as the first-ever player in the world to play roulette professionally, as well as the first player to hypothesize that no two roulette wheels are the same. For this reason, he believed that he could compute the results of a spin rather than take an educated stab in the dark.

Many players across the world have also tried to emulate his style of playing and philosophy, which is pegged on the belief that a roulette wheel has flaws. Legend has it that Joseph discovered this after bribing six Monte Carlo clerks to write down all the results of all roulette wheels over a couple of weeks. Upon going through the results, Joseph noticed that one of the roulette wheels consistently hit the 7, 8, 9, 17, 18, 19, 22, 28, and 29 pockets – something that’s unnatural for a purely random roulette wheel.

With this newfound knowledge, Jagger visited the casino once more and played on the perceived flawed wheels for several days to win $375,000 – which would be millions in modern-day money. In fact, it was this event that saw him christened the tag– “The Man Who Broke the Monte Carlo Bank.” Unfortunately, the casino operator caught wind of the huge wins and removed the wheel. That was the least of Joseph’s worries, as he took his winnings, quit his job, and invested in his own business.

Compared to all the other players on our list, Mike is not just your average guy. For starters, he’s a billionaire entrepreneur who owns multiple business ventures, including the football club Newcastle United. In early 2008, Mike Ashley decided to flirt with playing roulette to see whether he could add something to his fortune.

He visited a private casino in Mayfair and placed a whopping £480,000 practically on every inside bet that he could, including the number 17. Also known as a ‘complete bet’, it incorporates all splits, streets, corners, six-line bets including 17. Plus, and a straight-up bet on 17 itself. It is reported that he also wagered on other bets including the first half, middle column, middle dozen, black and odd.

In the end, the billionaire managed to win a total of £1,300,000, meaning he got a net profit of £820,000. For a guy like him, this may seem like a bucket in the ocean. But the epic part, however, is that the ball settled right where he wanted it to.

Sir Phillip Green is yet another roulette player that can afford to bet obscene amounts of money without having to worry about the mortgage. Although his passion for casino games largely leans towards blackjack, his bold roulette bet and consequent win in 2004 helped the billionaire make the news.

In a single night, Phillip cashed out over £2 Million at the Les Ambassadeurs casino, and it is reported that he won a series of other big bets in the same year. His winning streaks even forced officials at the London Clubs International to issue statements on their dwindling profits. This is enough proof that players like Sir Phillip Green can sometimes be a big threat irrespective of the house edge. To those of us living on the fast lane, however, the rule that the house always wins still stands.

Those are some of the best-known roulette players. Although some have ceased playing, it’s hard to deny the fact that they paved the way for the modern-day roulette legends. But most importantly from our list, it’s clear to see that anyone can win at roulette – right from people who wager their life savings, to the most successful billionaires. Go ahead and try out your roulette luck in your favorite online casinos! You never know, Lady Luck could be smiling right back at you. 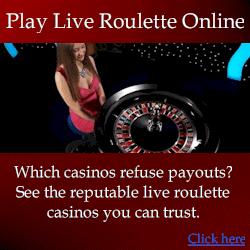